Looks like our test machine has got some read errors – better back it up soon!

Did you know… Causing random bus resets while testing devices is an excellent way to test proper drive behavior?

The Bus Reset tool can issue resets to any host bus adapter on your system, and can be used in three modes:

Don’t forget – you can monitor the results of your I/O testing, including capturing bus resets, using BAM

Build & Run STB Scripts – See our online tutorial on how to create and run Scripts using the SCSItoolbox Suite.

Under the STB Disk or Test Command menus is the Build/Run Script selection: 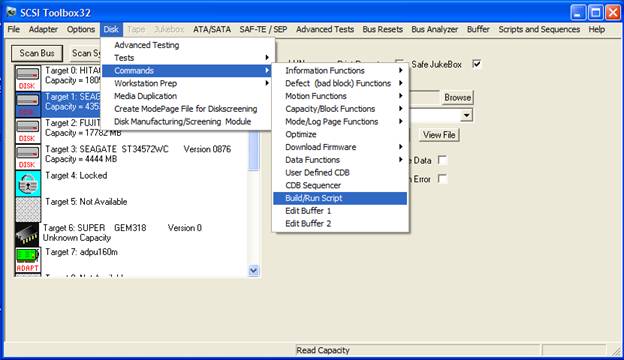 This menu choice lets you quickly define scripts which can send user defined commands and call tests from the suite of standard STB tests.

These scripts will run on one drive at a time. You can choose to cycle through multiple devices. If you need to run tests or issue commands to multiple drives you should use the Disk or Tape Manufacturing Modules (DMM/TMM) instead.

Ask Dr. SCSI –How long will it take to test all the drives on my system?

Q. “Hey Dr. SCSI – I hope you had a nice Thanksgiving and will have a great Christmas! I will have a good one if I can be sure that all of my disk drives get tested. How can I calculate how long it will take to test my drives? And what are the time-limiting factors that I should be aware of? Is there anything I can do to get more drives tested in a given amount of time?”

A. “Yes thanks for asking, I had a great Thanksgiving!

What you are asking about all comes down to bandwidth. Think of your computer system as a series of pipes. Each size pipe can only have so much data moved through it at a time. If a pipe gets filled up the data coming into the pipe starts to get backed up and has to wait for the pipe to get emptier before it can get its turn to pass through. What makes this scenario complicated is that there are many of these pipes in your computer storage system. So it is important to know what size the pipes are. Here’s a quick list of pipes that your data has to traverse during testing:

It just so happens that this is usually the same order of “pipe-wideness” or bandwidth, from lowest to highest.

As a practical example let’s assume a disk drive that can sustain data transfer out to its interface bus at a rate of 50 MB/s. The capacity of the disk, divided by the transfer rate of the disk will be the time that it will take to read or write the entire disk. In this example let’s define a disk of 500GB capacity. 500 GB equals 500,000 MB. At 50 MBs transfer rate it will take 10,000 seconds, or 166 minutes, or right about 2.75 hours. If that’s as fast as the drive can go, then it will always take that long to read or write the entire drive.

OK – so if one of these drives takes 2.75 hours to do an entire transfer, how long will it take 5 of these drives? This is where the interface and HBA speed can start to have a big effect. Because each of these is another pipe of another width. If you have a slow bus/HBA combination you will start to see these times stretch out and no longer be a linear equation. Once your interface/HBA bandwidth is used up data will once again start to back up.

So let’s take another example – let’s look at a 1G fibre channel setup. For arguments sake we will say that this interface/HBA can pass 100MB of data per second. So – as before – add up the total number of megabytes from each drive, and divide that number by 100MB – and that is the maximum bandwidth you will ever achieve .Your one 500GB drive will still take 2.75 hours. In fact, two of those drives will probably be able to complete in that same time. But three drives will take 15,000 seconds, or 250 minutes, or a bit over 4 hours. Because the interface/HBA is the limiting bottleneck.

Beyond the interface/HBA pipe lies the HBA to computer memory pipe. The newest commonly available storage bus is the PCIe bus, which has several variations. But at some point, with enough fast drives connected via a fast interface this HBA to computer boundary will also become a limiting factor as far as “how long will it take to read or write x number of y sized drives.

So – if you have lots of high capacity you can predict approximately how long it will take to test them. You can play with testing less than 100% of the drives if time is the maximum constraint. Otherwise, spreading the drives out across multiple test stations will let you achieve your target number of drives tested per day.

There are several points within the STB Suite where you can see the actual per drive sustained and peak transfer rates, as well as the total system throughput in MB/s. Run the Disk Manufacturing Module, set up a test to do a sequential read test for 5 minutes. Select all of the drives that you can attach to the system, then run the test. As the test progresses you can use the Test Status tab to view the drive and system performance metrics. Here is one example of a slow drive on a slow interface, and a fast drive on a fast interface – showing both the individual disk performance as well as the total throughput through the entire computer system:

You can’t fool Mother Nature, you would be hard pressed to fit 10 pounds of, um, Christmas cookies, into a 5 pound bag. And you can only transfer as much data as your system will allow. If one is not enough, call us and ask about the advantages of an STB Suite Corporate License.

Merry Christmas and Happy peripheral testing to all!

Don’t delay the End Of Year special that includes a 1TB External Drive is ending soon!

From now until the end of 2007 take advantage of our promotional offer that includes a Full SCSItoolbox Suite (including One Year of Performa upgrades and support) and a 1 TB External Drive for only $3995.00! Read more here.