iSCSI – How to connect to a iSCSI target

24 years ago our company and our product was called “SCSI Toolbox” because SCSI was the up and coming storage protocol.

In the years since then we’ve changed the name from SCSI Toolbox to Storage Toolbox, as SCSI became one of many storage protocols supported. Like PATA, SATA, Fibre Channel, SAS, and as this article discusses, iSCSI which stands for Internet SCSI, or SCSI over ethernet.

If you are working with iSCSI storage you will be happy to know that all of the tests and features of the STB Suite will work with iSCSI devices!

You can connect your STB Suite test system to iSCSI devices via a dedicated hardware iSCSI adapter, or you can use the built-in-to-Windows iSCSI initiator software initiator.

This article describes how to use the Microsoft iSCSI Initiator to connect a iSCSI target.

From your desktop, there should be a desktop icon for the Microsoft iSCSI Initiator, as in the picture below: 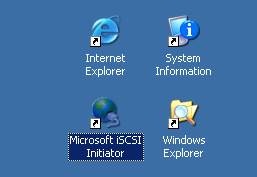 STEP 2: Click on the “Available Targets” tab, as in the picture below: 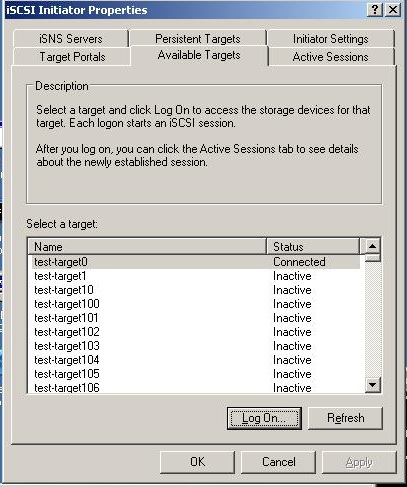 In the picture above, you can see we have several iSCSI Targets, one is already connected, while others are inactive.  Go ahead and click on one of the “Inactive” targets, and then click the button “Log On…”.  If all goes well, you should now be connected to that target (see the picture below) 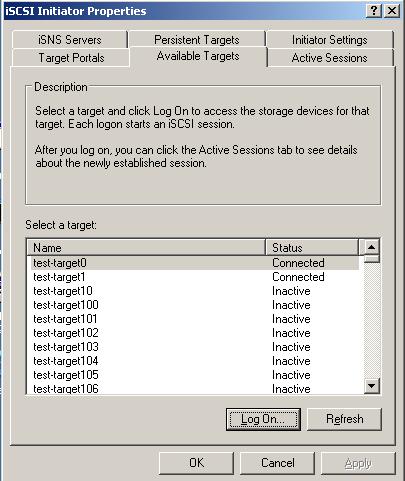 Bring up Device Manager and open up the “Disk drives” folder

Click here to see the iSCSI devices once they’re connected. 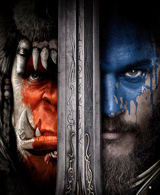 Q. Dear Dr. SCSI – My customer requires that as part of our test procedure we “execute a DoD-5220/NIST disk purge”.

My understanding is that that type of purge requires 3 full write passes of the entire drive. I just tried a 4TB drive and can see that it is going to take over 6 hours per pass – 18 hours total!

Is there anything I can do to meet the customer requirement but in a faster way?

A. Yes, you can cut your old purge time down to one-third of the previous because of a change made to the DoD5220/ NIST specification in 2012!

2006 –  Overwrite all addressable locations with 1)a character, 2)its complement, 3)then a random character and verify..

Clearly three passes was specified at that time. Actually the argument could be made for four passes, since there is  the vague requirement to “verify”. Does that mean verify every block on the drive? One block? The official specification doesn’t make this very clear.

2012 – If neither of the first two options is supported, use the native read and write interface to write least a single pass with a fixed data value, such as all zeros. Multiple passes or more complex values may alternatively be used.

SCSI Hard Drives This includes SCSI, SAS, Fibre Channel, etc. Clear: Overwrite media by using organizationally approved and validated overwriting technologies/methods/tools. The Clear pattern should be at least a single pass with a fixed data value, such as all zeros. Multiple passes or more complex values may alternatively be used.

The new specification document describes the newer purge methods such as the SANITIZE and CRYPTO ERASE commands, but this article is mainly about the question of “how many passes does the DoD 5220 spec require” – and the answer to that is “one pass”. You can do more passes if you like, but one pass will meet the DoD requirement.

Note: all current purge commands such as the SANITIZE and CRTYPTO commands are supported by the STB Suite. In the next STB Suite release an option to specify either a “1-pass DoD” or a “3-Pass DoD” purge will be supported.

The Linux DME (Disk Manufacturing Engine) was originally created in 2003 to serve the needs of high-volume mass storage manufacturing and integration companies.

The typical feature set required by this type of customer includes:

What is the Linux DME?

The Linux DME is a GUI-less Engine which executes STB Suite DMM test sequences on multiple disk drives. Being a command-line program means that the Linux DME may be run on any computer running the Linux operating system. There is no requirement for any type of graphics console – Linux DME can be run across a network on “headless” computer systems. 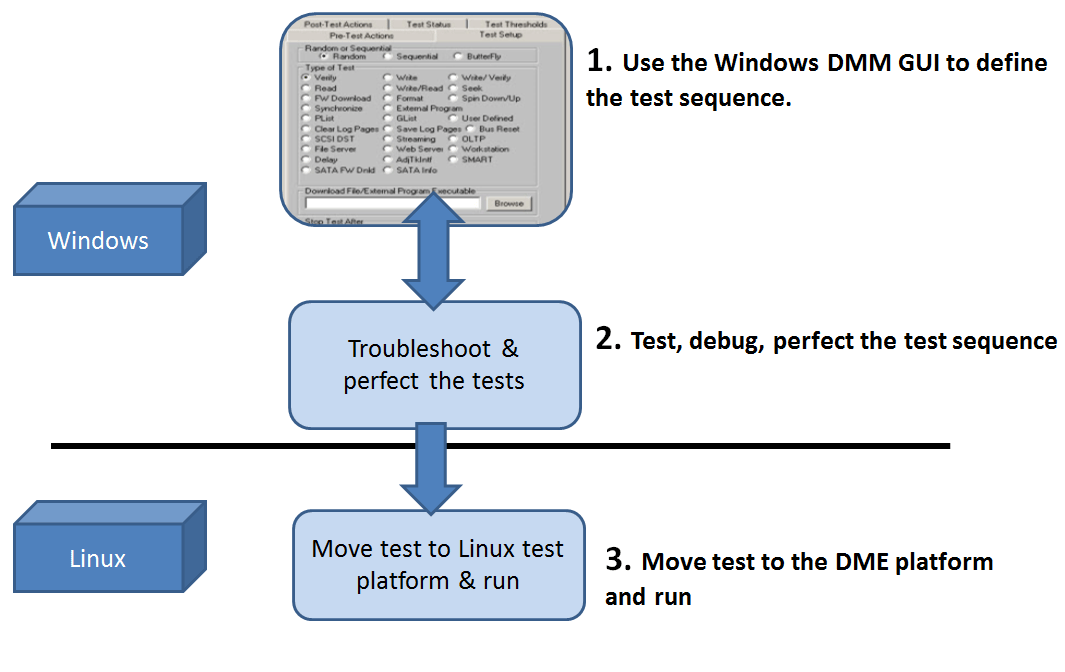 How is Linux DME invoked?

The STB Suite includes the following tools for the Linux platform:

Full source code for the DME is included!

Here are a few common questions which come into our support department about disk drive errors. In particular this article will discuss SATA disk drives.

2. How does the drive deal with errors?

3. How do you check for errors?

4. Can errors be repaired or removed?

5. How many errors is too many?

6. Can I reset the error counters?

There is a common and fairly accurate analogy that a magnetic disk drive (rotating platter(s) with head(s) “flying” over the platter(s), is like a super-fast airplane flying hundreds of miles per hour at a very low height – say 10-20 feet.

This is a very bad thing, physically scraping your data off of the drive platter, which can lead to more crashes, etc. This debris can appear in the drive as the drive ages, or if the drive has been subject to physical abuse or impact.

Another way that physical damage can happen is if the drive is running and is “jarred” or impacted. Think of bumping or even dropping your laptop computer as it is running. The impact can travel to the disk drive and cause the disk heads to “slap” into the media, causing physical damage, pieces of the media to flake off, etc. Remember, a head-slap is similar to an “airplane flying into a boulder” slap – probably a very bad thing!

Bit Rot is the term for when during the aging of the drive media, heads, or circuitry it has areas which change. These changes may be very slight, but they may make areas of the drive “weaker” or less able to hold the magnetic pattern (your data) written on those areas. Or perhaps there was a very fast and slight power glitch just as the data is being written or read from the drive. The media may not have any physical damage, but the data on isn’t correct.

How does the drive deal with errors?

When data is written to a disk it includes error-checking data (ECC) which the drive can use to:

ECC methods can detect a single bad bit of data out of the entire block (normally 512 bytes or 4096 bits). That’s pretty impressive error detection and correction!

If the data cannot be recovered using ECC methods then the computer or drive will probably retry the read or write operation a few times to see if the error was just a fluke.

Differences between SAS/SCSI/FC and SATA

Differences Between “Consumer” and Enterprise”  Drives

Enterprise class drives are typically configured in the server into RAID arrays. RAID arrays can deal with errors without help from the drive, and so they don’t need or want the drive to take the time to try to do its own error correction. Drive error correction methods take finite amounts of time. 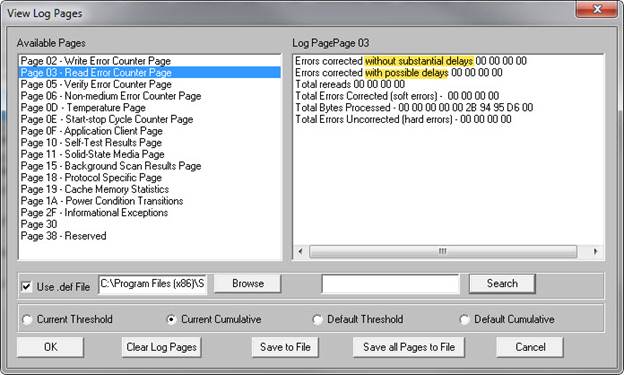 Even non-RAID type of enterprise applications may need the drive to treat errors differently from one case to another. For example, in a system that is collecting video data which is coming in very fast and can only be captured once may want to ignore all types of error correction and just try to capture all of the data – errors or not.

Versus a disk drive holding your bank balance, where speed is not anywhere near as important as data perfection.

As mentioned above, SAS/SCSI/FC drives allow you to adjust these error correction methods while SATA drives do not.

Which is why there are “desktop” SATA drives and “enterprise” SATA drives – the drives will have different firmware to deal appropriately with errors in the intended application or use of the drive.

How to Monitor or Check for Drive Errors

To check for drive errors on a SATA drive you need to look at the drive’s SATA SMART DATA ATTRIBUTES, in particular ATTRIBUTES 5 (Reallocated Sector Count – sectors or blocks which have already been reallocated) and 197 (Current Pending Sector Count – sectors waiting to be reallocated. In the STB Suite you can see these ATTRIBUTES by using the top menu ATA/SATA->Commands->View SMART Data function. In multi-drive mode (DMM) you use the SMART test step to record the ATTRIBUTES to the log files and also to screen or fail drives which exceed your chosen thresholds for these counts.

Can Errors be repaired or removed?

SATA drives will automatically check for errors every time a READ or a WRITE operation is executed. If the READ/WRITE fails then the drive will try to recover the data and possibly mark the sector as bad and reallocate it to a spare sector. If that happens you should see the SMART ATTRIBUTES 5 and/or 197 increment.

Note: this repair or reallocation is automatic in SATA drives, so a good way to scan a drive to try to get any bad sectors reallocated is to use the STB Suite to do a simple Sequential Read test to the entire drive – all blocks.

How Many Errors is Too Many?

In my personal opinion and use I would never use a drive to hold valuable data if it had any reallocated sectors.

That means I personally would reject any drive with > 0 reallocated sectors. That’s just my opinion – here is my reasoning:

If the drive reallocated a sector it will always be because of a “problem”. That problem could be as benign as a power fluctuation during the read or write – where there really isn’t anything in the drive causing the problem. OTOH, that error could be because the drive has been impacted while running, causing head slap and media damage. You can’t know why a sector was reallocated, only that it was reallocated. I would not take the chance. But of course the threshold settings to reject a drive for this cause is 100% user decided and defined in the STB Suite.

Can I reset the Error Counters?

In one sense SATA drives are simple as far as dealing with discovering and trying to correct or repair errors. There are really no user accessible adjustments to change. A simple sequential read test will discovery and hopefully correct any errors found.

A DMM test sequence to do this would look something like this:

Note: This is a non-destructive test – it will not damage, change, or overwrite any user data.