How to write an entire drive – the old way

What writing one single drive entails

Real-world numbers for a typical test system show that we can sustain a data rate of around 100 MB/second.

Going back to the disk size of 1,953,525,168 512-byte blocks, and factoring in a sustained transfer rate of 100MB/second we can see that it is going to take 2 hours and 38 minutes to write the entire drive. The DMM log file will confirm this number.

We know that the process of writing the entire drive using 128 block-per-I/O  is going to need approximately  15,261,915 Write Commands or CDBs.

Issuing each one of these 15,261,915 CDBs takes certain amounts of  time, consisting of:

What writing to multiple drives at once entails

We have all seen that no matter how powerful our test computers are, and no matter how fast our disk drives and host bus adapters are, a state of data-saturation will always happen as more drives are added into the test.
Our example typical test system with one PCIe SAS host bus adapter can typically sustain an aggregate data rate of approximately 500 MB/second. This means that we can run up to 5 disk drives at full speed, but adding more than 5 drives to the test will cause all of the drives to slow down.

Once we exceed our systems total I/O bandwidth our test times will multiply and climb.

Remember the list up above of four separate little things that needed to happen 15,261,915 times to write to all of the blocks on the drive? We still need to do each of those four things – but what if we only had to do them once?

As the name of this command implies, this CDB is going to WRITE the SAME data to some range of blocks on a drive. Such a range as “the entire drive”. To write to every block on the drive we:

After the drive receives this one command and one block of data it will go on it’s way copying that block of data to each of its’ blocks. During the time that the drive is copying it does not take up any I/O bus bandwidth.

Now, we all know that there’s no such thing as a free lunch, even with the WRITE SAME command. We only send our 512 bytes of data over the bus to the drive one time – but then the drive takes that 512 bytes and copies it 15,261,914 more times internally to each block. Since your disk drive still has physical constraints upon it you will still take about the same time as it would take if it was the only drive on your system runningat full disk speed.

The first “Normal” Sequential Write test ran in 2 hours 38 minutes, or 158 minutes or 9480 seconds, and as is shown, the WRITE SAME test #2 accomplished the same result in 6660 seconds. Just about 50% faster. Obviously all of the overhead associated with processing a CDB 15,261,915 times adds up quickly!

Some drives will see a slight improvement using Write Same versus a sequential write test, others will take about the same amount of time.

But overall, with each drive doing its own data copying and not using any I/O bus bandwidth, when writing to many drives you will see a dramatic decrease in test time.

So we see that by using the WRITE SAME method versus the Sequential Write All Blocks method we may shorten the time to entirely write any given drive.

But the biggest time saving comes from eliminating all of those 15,261,915 data transfers for each drive, leaving the I/O bus virtually traffic-free.

There is never more than one drive trying to get data from the I/O bus at a time. And each drive only needs to copy one block of data from the test system instead of 1,953,525,168 blocks. Once the process is started and one block of data is transferred then as far as each disk is concerned the bus is free, it is busy copying data to itself while more drives can all do the same.

Using the new WriteSame test there is NO time penalty for writing to as many disks as you can attach to your test system.

There are practical limits, but they have been taken care of for you in the STB Suite implementation of these tests. In particular, this method with SATA drives is very “fragile” and must be done with upmost care. But once again, we’ve taken care of the nuts and bolts of this WRITE SAME method, boiling all the nitty-gritty details down into a simple menu choice in DMM.

There are two separate Write Same DMM tests, one for SCSI/SAS/FC drives and another for SATA drives. Click  the DMM External Test button in the test type area. A pop-up window will ask if you have any command line parameters. Enter the data pattern you want written to the drive.
Available data patterns are:

Enter the data pattern, click the OK button, then in the Download File/External Program Executable field enter writesamescsi for SCSI, SAS, or FC drives, or enter writesamesata for SATA drives. 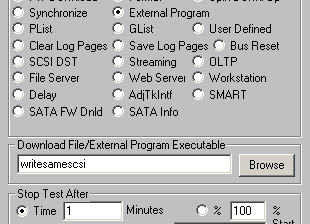 then click the Add This Test to Test Sequence button.