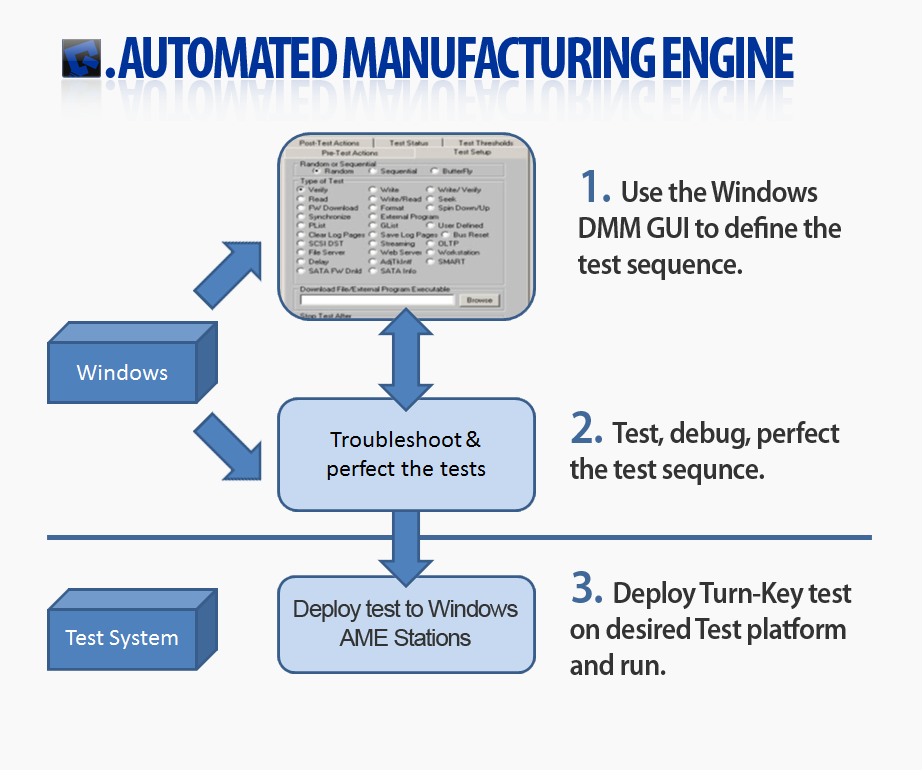 The Automated Manufacturing Engine (AME) is STB’s new automation tool that allows you to run scripts created in our Disk Manufacturing Module (DMM).  AME can be run from a Command Prompt Window or even a batch file.  Like other automation tools, once run it requires no user-intervention or “baby sitting”.   After AME completes, the user can then analyze the extensive logfiles for success or failures.

In order to run AME, there are five steps that must be done.  These steps are

STEP 1: Create, within DMM, one or more testing scripts

Our first script that we will create in DMM will consists of 4 tests.  The first test is a “Write Test, Butterfly Access, for 1048576 blocks”.  See the pic below: 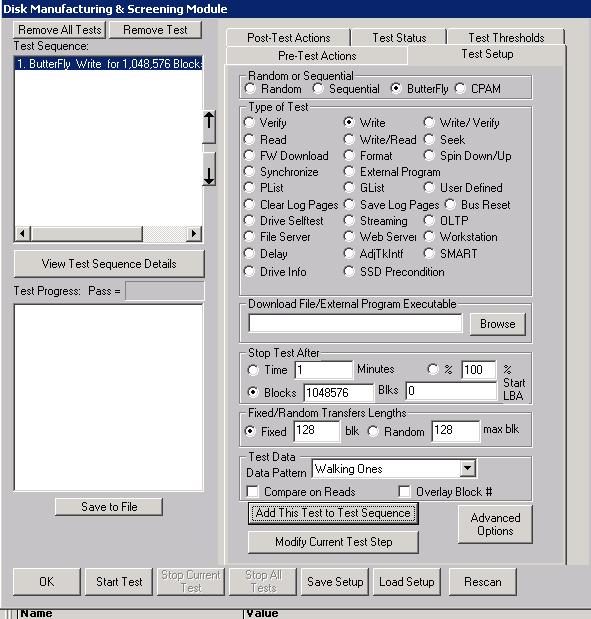 Our second test will be a “Read Test with Data Compare, Butterfly Access, for 1048576 blocks” – this step is to verify that the pattern “Walking Ones” was indeed written to the start and end of the drive.  Our third step is an “External Program Test”.  The “External Program” name is the DMM’s “WriteSameScsi” Test (you do not need, in this case, to create this executable, DMM already “knows” about it).  See the pic below: 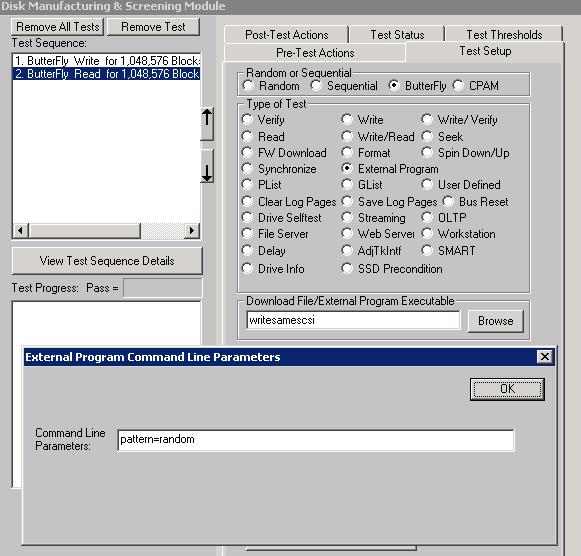 Notice in the pic above, as soon as we clicked the radio button “External Program” DMM brought up a dialog box asking for the command line parameters.  In the above pic, we have entered “pattern=random” (this tells the WriteSameScsi application to write a random pattern to the drive).

Our final test is a “Read Test, Sequential Access, for the Entire Drive” – this step is to verify the entire drive has in fact been written with a random pattern.

In DMM, the 4 tests in our script looks like what is shown in the below pic: 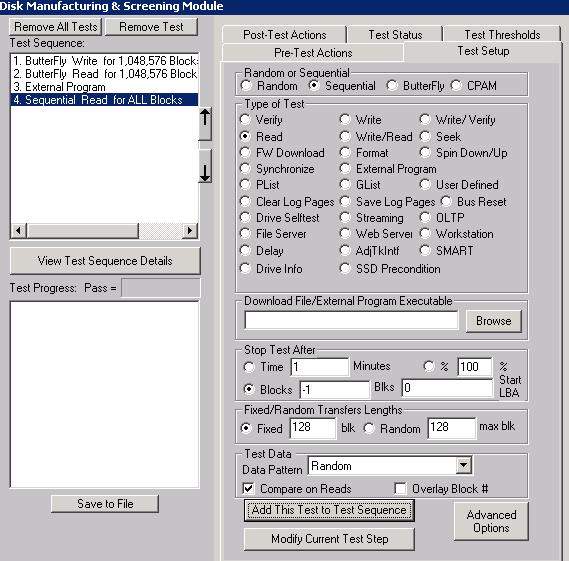 Now let’s save off this script – this script will be “fed into” our AME product.  Go ahead and click the “Save to File” button, and save it off to the file “OverwriteDrive_SCSI.seq” (see the pic below): 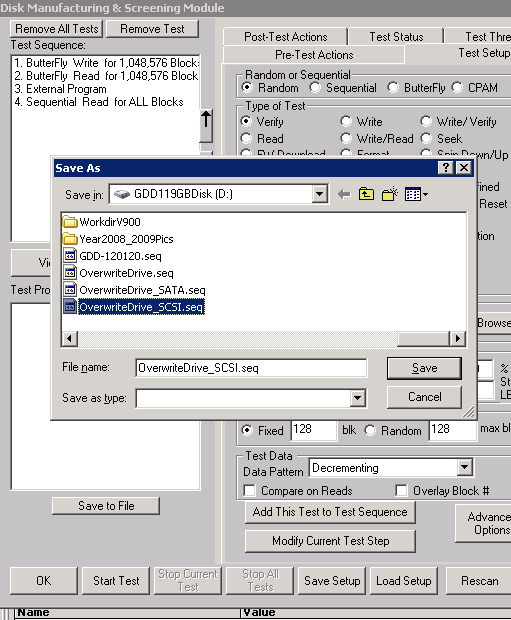 Now let’s create a second script – this script is identical to the above script except that it is designed for SATA drives.  Test steps 1,2, and 4 are identical, but step 3, the “External Program Test” is different in that the program name now is “WriteSameSATA” (see the pic below): 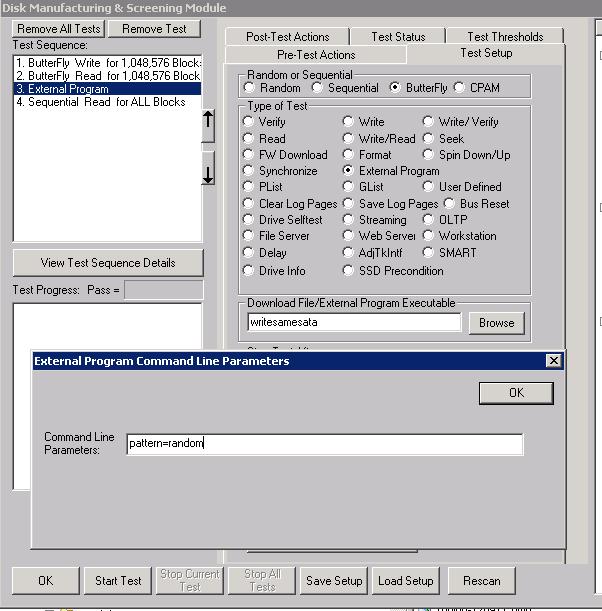 Go ahead and save this script off to file “OverWriteDrive_SATA.seq” 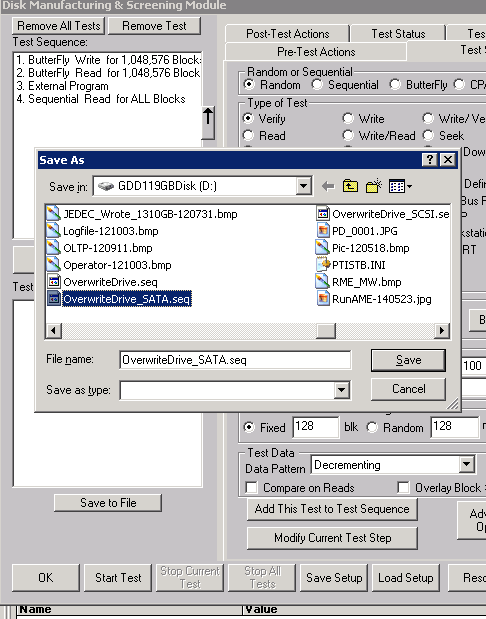 STEP 2: Decide which devices on your system will be tested

AME has two ways to tell it which devices you wish to test.  These are the
“device=”

The two parameters that you will pass to AME tell it which devices to test (more on this in STEP 4).  But here are a few examples of using these two parameters:

Example 2: AME.exe AMEConfig.txt hba=3,6
In this example, AME will test all devices attached to HBA #3 and HBA #6.
You can have as many HBAs listed.  Notice the list of HBA numbers are separated by a comma, and that there are no spaces in between

STEP 3: Create a configuration file that will test the devices in step 2

To inform AME where the logfiles are to be stored, you use the keyword “PATHTOLOGFILES”.  Here’s an example:
PATHTOLOGFILE=d:\workdirv900\amelogfiles
IMPORTANT: We recommend that there be NO spaces in the path to the logfiles!

To inform AME which scripts are to be run against which devices, we use the keyword “DEVSEQ”.  Here’s an example:
DEVSEQ:VENDOR=Seagate,SEQ=OverWriteDrive_SCSI.seq

Notice in the above example, the format is basically

What this DEVSEQ line in your configuration file tells AME is that out of all the devices you list in STEP 2, any one of them which is made by Seagate, AME will run test sequence file “OverWriteDrive_SCSI.seq against these drives.

The parameters to launch AME from a command prompt window or a batch file are as follows:
AME.exe Configuration_File_Name List_of_Devices_To_Test

Notice there are just two command-line parameters to pass AME.exe

Here’s an example from STEP 2:

If you have defined the PATHTOLOGFILE keyword in your configuration file, for example you have a line such as

Then to locate your logfiles, go to the folder you have specified in the PATHTOLOGFILE line.  The logfiles have exactly the same information as the logfiles created by DMM.

To use the SATA Write Same test in AME do the following:
Setup an external program test step as outlined in the section “DMM SATA Write Same Test” and add this test to your test sequence that will be inputted into AME via your configuration file.