The STB Suite “original mode” ATA/SATA function for viewing and setting or changing SATA FEATURES has had a major makeover with many improvements in the new STB Suite version 9.0

Both types of drive connection supported

This new feature makes viewing and changing SATA Features on any drive much faster and easier.

Here is a screenshot of the new View & Set Features function showing both types of connections:

In the previous version of View & Set Features there was one button that you click after changing one or more features. This actually issued many SET FEATURE commands, even if only one Feature had been changed, which could cause compatibility problems with some drives.

The new View & Set Features function presents a Change button for each individual Feature, so that only one Feature at a time is changed.

As soon as you change a given feature the Feature name will be displayed in Red to indicate that the current setting shown on the screen has been changed from what the drives setting was. For example, the selected drives WRITE CACHE ENABLE Feature was set to Enabled, and now we have checked theDisabled button: 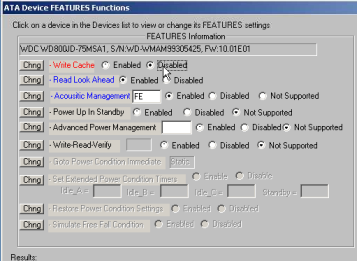 Clicking on the Chng button next to the changed Feature issues the SET FEATURE command for that Feature, the result of the change is displayed in the Status window and a new IDENTIFY command is issued and the main Features display is updated to reflect the change: 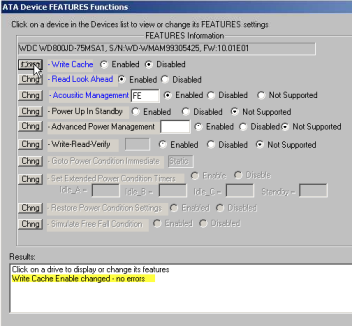