We are frequently asked by our customers “what drive enclosure do you recommend for testing?”.

For SAS and SATA we typically answer in generic terms – “any industry standard non-RAID SAS/SATA enclosure, with or without an expander, will work fine.”

For this article we are going to review a specific enclosure, the SC-ASAT84XT External, 8-bay, Trayless SATA/SAS Hotswap enclosure from PC-Pitstop.com 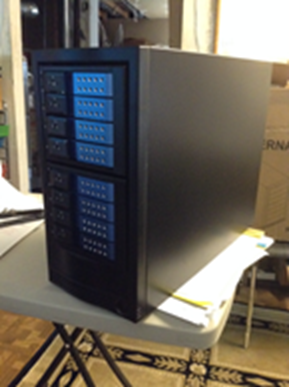 Front view of the eight-drive enclosure

The SC-ASAT84XT enclosure is a stand-alone box the size of a large desktop PC. It has slots for eight 3 ½ “ SAS or SATA drives. These slots are “trayless”, that is to say that there are no trays, slides, or sleds needed, you simply load in 3 ½ “ drives.

At the minimum a drive enclosure needs to provide power and cooling. A disk drives biggest enemy is heat, and a test setup that doesn’t cool all drives sufficiently is not a good solution! That will not be a problem with this enclosure.

This enclosure has a 300W power supply, and it has what we consider very good cooling capability. There are three external cooling fans venting the entire box, and there are two internal cooling fans, one for each group of four drives. These fans are directly behind the drives in a sealed plastic box. There are two of these boxes, one for each four drives. These boxes provide the backplane with data, power, and indicator connections, the trayless drive insertion and holding mechanism, and the large exhaust fan. 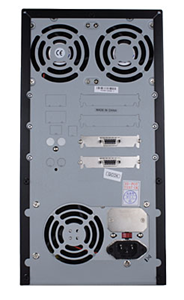 Rear view of the enclosure showing the three large cooling exhaust fans and the four-port data connectors. Despite the number of and size of the fans the enclosure runs very quietly.

An interior view showing an exhaust fan for each group of four drive slots. 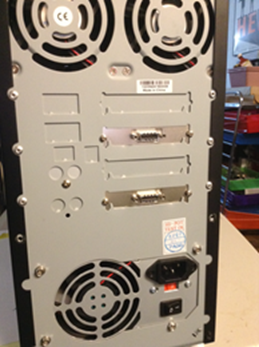 This enclosure does not have a SAS expander, so each channel of each connector attaches directly to an individual drive. This limits a typical 2-port SAS HBA to connecting to eight drives max, but it has the advantages of much lower cost and the ability to mix-and-match 3G and 6G drives, each able to negotiate to its highest transfer rate. Yes, an enclosure with a 6G expander can also do this – but not at this price point.

Hooking it up and trying it

Setup is simple – attach the standard (included) 120VAC power cable, and attach each of the enclosures SFF-8470 connectors to the four-port connectors on your HBA.

Open each drive position by pulling on the drawer lock/release, then slide any 3 ½” SAS or SATA drive into the slot with the drives data and power connectors to the rear. Once the drive is almost seated the lock/release lever will engage and you use it for the final stage of insertion.

Each drive slot has a power/activity LED.

Attaching the enclosure to a test system with an LSI 9200-8e 6G SAS HBA was a simple matter, and the entire setup process was completed in 5 minutes or so.

Having a look with the STB Suite shows an orderly arrangement of targets 0 through 7, mixed SAS and SATA drives 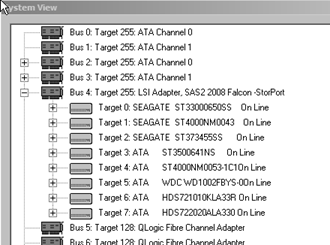 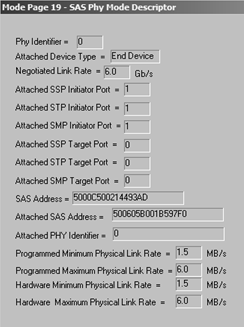 To get an idea of what sort of performance can be expected in a typical multi-drive testing situation we first ran sequential write and read tests to each individual drive, then to four drives configured as two per HBA port, then all eight drives (four drives to each HBA port).

Results of this testing is shown in this table:

This shows a very consistent picture, with the HBA being able to run two drives per port at full drive speed, then when running the full eight drives the aggregate bandwidth is very evenly divided among the target drives. In the real-world this means that performance results of this enclosure/HBA/System are very predictable which will make estimating test run times a very simple and accurate job.

Considering the price-point of this enclosure ($339.99 direct), the fact that it is new and has a 1-year warrantee, and that no trays are needed we feel that this enclosure is a very good value for a small to medium capacity test setup.

For more information on this enclosure follow this link –

If you’re interested in purchasing one of these enclosures, please contact Paul Haley or his team at PC Pitstop: http://www.pc-pitstop.com/ or Sales directly at: sales@pc-pitstop.com Let them know you heard about them from STB!