In the early 1990’s the government agency assigned the task of defining what processes could be used for non-destructive purging certain levels of secret information from disk drives fell under the oversight of the Defense Investigative Service (DIS). DIS later changed into DDS (Defense Security Services), which became DoD (Department of Defense), and finally today we have NIST (National Institute of Standards and Technology).

In those early years a company had to actually have its disk purge method approved by DIS.

As opposed to today, where anybody can claim “Conforms to NIST or DoD standards”

After several months of trips to DIS labs, refining, and documenting, our process was finally approved.

At that time the procedure was to get DIS approval (done), and then get a branch of the armed forces to “sponsor” the purge method. Our sponsor was the US Air Force. They provided us with a letter of introduction stating that our process was DIS approved, along with a set of instructions and a contact name & number.

This entire process took close to a year to complete.

Whenever a new government agency or subcontractor approached us about purging we would send them our package of credentials, they would do their due-diligence, and we were on our way.

We were invited to present our methods and credentials at seminars, summits, and security forums. There was a real paradigm shift needed in the minds of the security specialists, since up until then physical destruction was the only way to deal with “purging” sensitive information.

Remember – this was back in the early-mid 1990’s. Disk drives were very expensive, and the ability to reuse rather than destroy was very attractive, but also a very new concept.

At that time ATA or IDE drives were truly “consumer” products. They were very small capacity, very unreliable compared to their SCSI enterprise-level cousins, and just weren’t used in scientific workstations and small computers.

But as we all know, that situation has changed radically over the past two decades.

By the early 2000’s Gordon Hughes and his Center for Magnetic Recording Research team at UCSD was hard at work on the new ATA SECURITY ERASE. We worked with them, along with some very interesting labs in New Mexico, testing, trying things, examining platters with electron microscopes – real science! Just now, going back and reading emails from that time brings a nice feeling of nostalgia to old Dr. SCSI!

And out of that came the now-standard SECURITY ERASE functions for ATA/SATA drives.

The world of drive purging is constantly changing. As drive capacities increase and as billions of disk drives are emplaced the need to purge sensitive data has never been higher.

Read about these future technologies being used and incorporated into STB and the Summary of our History of Drive Erasure here.

Here are some example screenshots of BAM capturing an I/O session to a native SATA attached SSD drive. Also is an example STB Suite DMM (Disk Manufacturing Module) log file of the session which generated the I/O.

As a point of reference, all of the test functionality of DMM and BAM are also available via api calls using the STB Suite Developer Toolbox (DTB) API.

A BAM trace captured via the DTB API calls may be read into the BAM GUI to obtain the post-capture analysis.

This is a sample of the trace data showing the captured phases as they happened in time.

The series of Data-In phases are the results of WRITE commands issued above in the time-line.

This is the Trace Performance Analysis report BAM generates.

A trace which was captured via DTB API calls can be loaded into BAM to get this analysis on any captured data set.

Upgrading to 12G for HDD Testing

In case you’re not interested in the why’s. But if you are you’ll find them at the bottom of this article

The Bottom Line at the top

More drives per day out the door.
That’s it – you can run more drives at a time, at higher speeds per drive.

And that translates into more drives processed per day.

And that number goes right to your bottom line.

Yes, there is an investment in new hardware, mostly in enclosures. Possibly some in a new test computer with PCIe-3 slots. A 12G HBA is about $400.

But the ROI is good and fast.

A “power system” (PC with PCIe-3 slots, 12G HBA, 12G enclosure/cables) is going to net you six or seven times more drives out the door per day.

Width is the key

Think of the maximum bandwidth or throughput as lanes on a highway.

You may be testing older drives, 3G SAS and SATA drives.

But you will still see a vast improvement in drives-out-the-door.

That’s the bottom line – you can run more drives at a time, at higher speeds per drive.

And that translates into more drives processed per day.

And that number will quickly work its way to your bottom line.

Now for some details

The speed or throughput history of SAS and SATA devices has grown or increased dramatically. Beginning at 1.5Gbps, scaling up to 3G, 6G, and now 12G (SAS drives only) per SAS port, with 24G (again, SAS only) on the horizon. The SATA specification at this time does not extend beyond 6G.

What do the speeds really mean? Translation…Drilling down to reality

It’s really fairly simple. A SAS port which can transfer data at 12Gbps has a maximum throughput of just that – 12 GigaBITS per second.

Gb vs GB vs MB

The little “b” means bits, but the real world of working with disk drives is used to numbers expressed in Bytes, not bits.  A little later on we will convert our G bits to  G Bytes.

But how fast can your test computer transfer that data from the SAS interface into or out of computer memory?

That speed is a factor of what type of PCIe bus you are plugging your card into.

Typical SAS HBA’s will be 8-lane PCIe type of card.

As you can see, your test system’s PCIe bus speed is just as important as your HBA speed.

A commitment to move up to 12G may involve a new test PC, as well as 12G HBA(s), cables, and enclosures.

HWinfo  and can be downloaded here – http://www.hwinfo.com/download.php 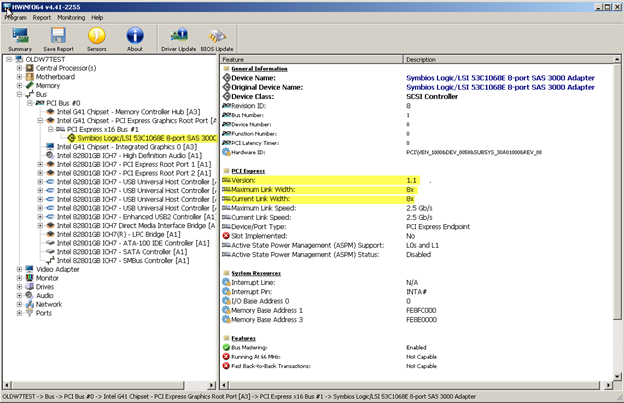 Note: the LSI SAS HBA (LSI-9200-8e) is plugged into a PCIe-1.1 slot. This will severely limit the actual throughput.

In actual fact this test setup can run at about 900MB/s max. In other words, with average disk drives (150 MB/s) we can only test 6 drives at a time at full speed. After six everything starts to slow down.

Bottom line – you won’t ship very many drives per month with this setup. 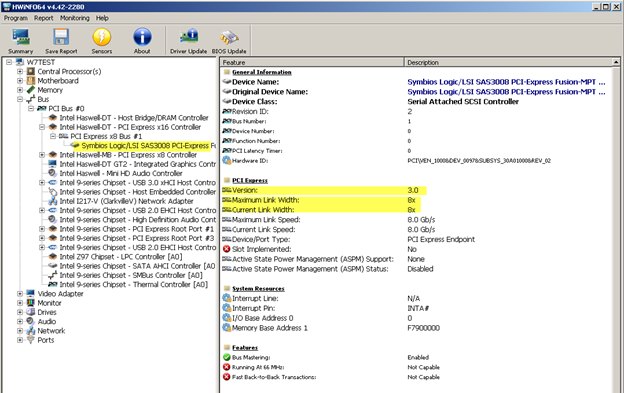 There is an up-front cost for new hardware (test system, HBA, cables, enclosures) – but with a 7-fold increase in product output those costs will be paid back in no time.

Enclosures and cables must be up to snuff

Read about Enclosures/Cables, things to be aware of, and the summary of the summary!

Q: “Dear Dr. SCSI, I need to sort a pallet of disk drives by each drives number of power-on hours. These drives are from a variety of different manufacturers.  There doesn’t seem to be a standard for retrieving power-on hours. Can you help me?  Signed Ageless”

A: “Dear Ageless, you are absolutely right that there is no standard way in which the number of power-on hours  (POH) are stored or read from your drives.  There are some manufacturers who store POH information here or there in vendor-unique formats, but there is no standard.”

But – it turns out that there is a standard location where POH is stored, always in hours. It’s just not very obvious where this is or how to retrieve it. The only caveats are this method takes approximately 2 minutes to run, and is only good for drives which have been powered up less than  about 7 ½ years. That’s not too bad of a deal!

The quick description:
In both SCSI/SAS/FC and SATA drives the drive will return a data structure when interrogated for Drive Self Test results. In addition to information about the results of Drive Self Tests the data structure also contains a timestamp, which is the number of power-on hours at the time this self test was executed!

All that you need to do is:

SAS/SCSI/FC POH To get the POH for the drive right now (this moment)  you must first execute a DST.

In the STB original mode Disk->Test->Drive Self Test menu choice be sure that the Short Test is selected then click the Start Test button. Once the short DST is finished the Results window will indicate that the test is finished.

The POH timestamp data is shown in the 4th & 5th bytes of data in the DST Results window. The most recent DST run/results will always be the top entry in the Results window:

SATA POH The same method is used to retrieve POH from SATA drives. In this example we will use the STB original mode, ATA/SATA->Tests->Execute SMART Self-Test menu choice.

Select the drive to test by clicking on it in either the Native or the SATA (SAT) Devices display. Choose the Short Self-Test Off-line mode Test Type, then click the Start Test button to start the DST:

Summary Now you know a quick and easy way to determine POHs for any disk drive. The next question Dr. SCSI usually is asked at this point is “can I reset the POH counter?”

Dr. SCSI says “Does anyone know the answer?  Anyone?  Bueller?  Bueller?”

The File Server Test is a great test for mixing writes and reads, for mixing transfer lengths, and mixing where the I/O accesses are.

Let’s go over each of these three attributes of the File Server Test.

Mixing of Writes and Reads:  The default for the File Server Test is to issue 20% Writes to the drive, and 80% Reads to the drive.  But you can modify this ratio by going to the Advanced Options dialog and inputting the desired Write/Read I/O Ratio.  In the picture below, we have entered “75” – this means we want 75% of the I/O to be Writes (and 25% to be Reads). 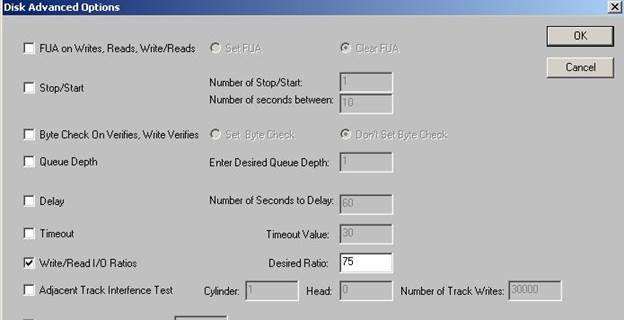 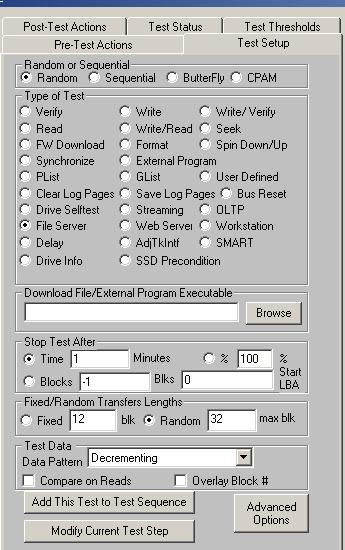 Mixing of Accesses to the Drive: The File Server Test accesses the drive in a random fashion (so, in particular, it is NOT a sequential access test). What this means is drive performance will not be opitimal, but closer to real world usage.

In summary, the File Server Test is the perfect test for mixing up all the normal parameters like Writes & Reads, transfer lengths, and accesses to the drive.

Read about the benefits of using the File Server Test in DMM and the Summary in the full article here.

We’ve added a new video to our online Virtual Training Center that will show you how to repair a SATA Security Locked HDD using the STB Suite.

Click the Screenshot to view the video directly, or here to view all the videos in the Virtual Training Center.