Is your testing time limited?

Testing the latest generation of disk drives – in other words, very large capacity drives – can seem like it takes forever! 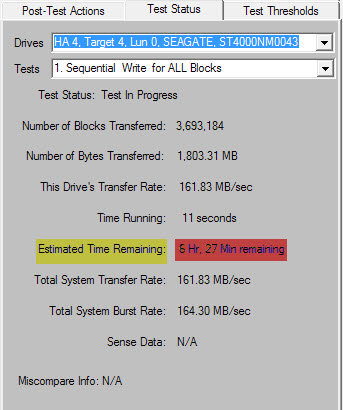 A friend who is an insider in the disk manufacturing business once commented that his company’s feeling was that if you test 15% of a new drive that will be statistically equal to testing the entire drive.

But for this to hold true the 15% that you test needs to be spread as evenly as possible over the entire drive.

In other words, testing the first 15% isn’t good enough, you need to spread that 15% over the entire 100% of the drives blocks.

Which is exactly what new DMM test features in the soon to be released STB Suite version 9.3 will let you do!

The new test Access Method  will give you two ways to a smaller percentage of a drive while spreading that percentage of the drive over the entire drive.

This method will let you specify the amount of time that you want the test (SAS or SATA WRITE SAME) to run.

The test continually monitors each drives transfer rate and adjusts the amount or size of each “skipped” section to insure that the maximum number of blocks possible will be tested in the specified amount of time.

This insures that the LBAs written are spread evenly across the entire drive surface.

The test will log normal test results along with the number of blocks written and what percentage of the drive was written.

Here is an example of what the logfile looks like:

This new method lets you specify the percentage of the drive you want to test. As in the new Test By Time method this Test By Percent method will spread the writes or reads over the entire capacity of the drive.

For example, this would let you take our friends advice and test 15% of the drive. It will spread the testing over the entire drive surface to test all areas of the drive. You can use this method with both the Write and Read tests so that you can use Data Compare on Read to check data integrity.

Here is an example of what the DMM logs show for these new tests. In this example we first do a write test to 10% of the drive, followed by a Read with data compare of the same 10% of the drive – 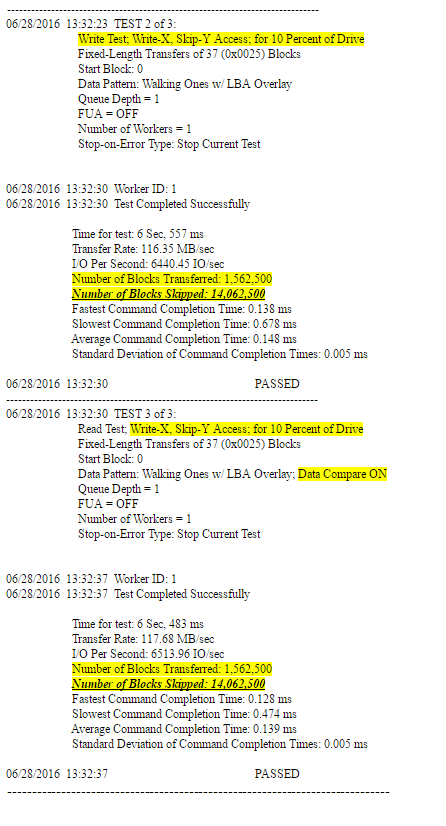 These two new test methods can help you take the amount of time you can allocate to a test and test the largest amount of the drive possible in that time. It monitors it’s progress in real-time to always maximize the number of blocks written in the time period.

Or you can use the second new method to test a fixed percentage of the drive, while spreading that percentage of LBAs across the entire drive.

Note: we have mentioned a few times in this article that these two new test methods are really designed for burn-in testing of new drives.

It may not be a good idea to use these test methods to refurbish returned drives if the drives have user data on them.

Since you will probably not be overwriting the entire drive there is a chance that user data would be left on the drive, in the LBAs which were skipped.

But new drives should never have user data anywhere on them, and testing a percentage of these drives is an acceptable compromise.